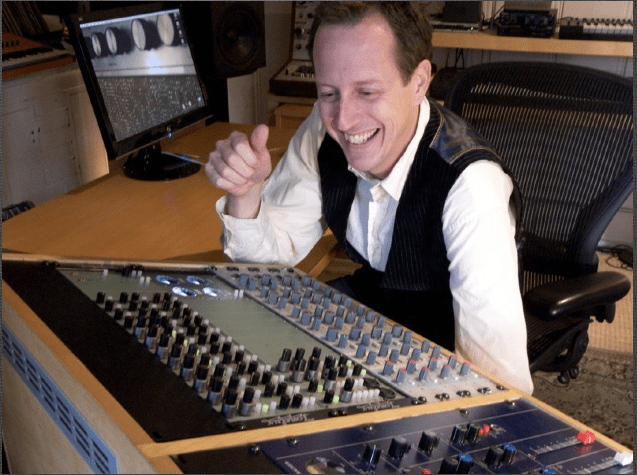 “My Peluso 2247LE was used to record all of Ben’s vocals and his acoustic guitar. Almost every song was based around a live take of him singing and playing at the same time and the 2247LE was positioned to capture this performance. Have a listen to the album: most songs begin with an intimate vocal and acoustic guitar with no effects. It’s a real showcase for the 22 47 LE microphone! ” -Brad Wood

Brad Wood:
I grew up in Rockford, Illinois, the home of Cheap Trick- the greatest band alive. I played the saxophone well enough to go to college and study jazz performance. Thank you, Adolphe Sax.

When I moved to Chicago in 1987, it didn’t take long before we built Idful Music Corporation- a small but mighty recording studio in Wicker Park. That’s where I recorded albums by bands like Seam, Tar, Shrimp Boat and Eleventh Dream Day. It was Liz Phair’s Exile In Guyville in 1993 that did the trick for my career. Thank you, Liz.

In 2000, we relocated to Los Angeles, home of X- the greatest punk rock band alive. After a few years of bouncing around LA’s amazing studios, we built Seagrass Studio in 2004. Seagrass is great and I’ve tracked or mixed everything there including Say Anything, mewithoutYou, more Ben Lee, the Bangles, Sherwood & Touché Amoré plus many more.  Thank you, Chris McClure.

I like to help people make records that are inspiring, lyrically and musically. For me, rock music works best when there’s intensity- a burning desire to bash out a message. It doesn’t have to be loud (although that helps). Thank you, Joe Strummer.

Seagrass Studios
Built in 2004, Seagrass is Brad’s personal studio. It consists of a tracking room, control room/lounge and outdoor lounge. Located in Valley Village, California, it is minutes from Hollywood, Burbank and Studio City. A 40 minute drive takes you to Malibu and the ocean or north to Mt. Baldy and snow. Oh, and Starbuck’s is a 2 minute walk away…

In 2004 Brad Wood produced Ben Lee’s Awake Is the New Sleep  album. His 22 47 LE was used for all of Ben’s vocals and hid acoustic guitar.